The visit gave John Spellar MP the chance to meet some of the furry residents from Dogs Trust’s nearby Basildon rehoming centre, whilst representatives from the charity were also on hand to talk about the benefits of compulsory microchipping and the importance of keeping a dog’s microchip database details up to date. 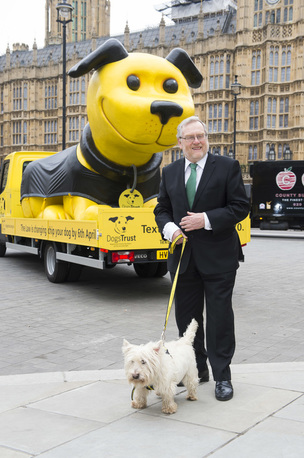 Over the past two years, Dogs Trust has been touring the country with its four tonne, 3.2 metre high yellow mascot Dogcilla in a bid to raise awareness of this important aspect of dog welfare ahead of the impending law change on April 6th when it will be compulsory for all dogs in Wales, England and Scotland to be microchipped. Dogcilla has already travelled the equivalent of the Earth’s circumference 5.8 times and will continue on her quest to ensure as many dogs as possible across the UK are microchipped by 6th April.

“Microchipping is the most effective permanent way to assist in a lost dog being returned to their owner which in turn reduces the number of healthy dogs unnecessarily put to sleep. To ensure lost dogs have the best possible chance of being swiftly reunited with their families, it is imperative that owners ensure their dog always wears a collar and a tag displaying their contact details, and that they keep their microchip database details up to date. Dogs Trust has committed to ensuring dog owners have access to free microchipping at one of our many drop-in events across the country and at our 21 Rehoming Centres across the UK before it becomes compulsory in England, Scotland and Wales on 6th April 2016.”

John Spellar MP said “This is a welcome development which will benefit owners, pets and the general public. I would urge every dog owner in Sandwell to get their dog legal”.

Microchipping is a simple and effective tool which helps to rapidly reunite lost or straying pets with their owners. This in turn reduces the number of healthy dogs unnecessarily put to sleep and saves money for Local Authorities by cutting kennelling costs.